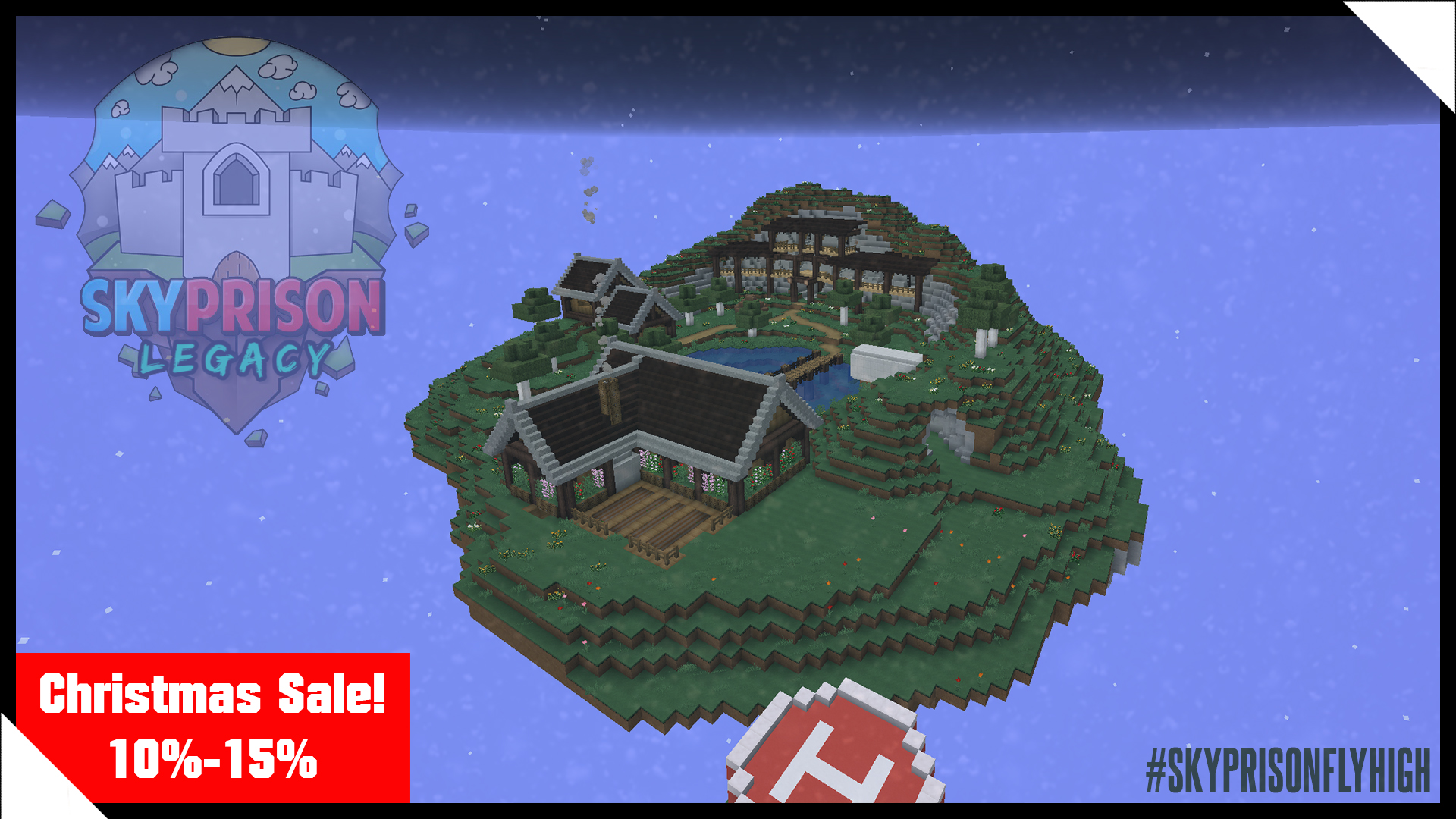 (All Donations bought now will be active from the 18th)​
Continue...
PRISON IS BACK BABY!!!
Dec
19
0 246 by blueberry09 : Dec 19, 2019 at 9:44 PM
Hellooo prisoners! I am happy to announce that the prison part of SkyPrison has finally made a comeback! It has now been opened. A changelog of everything changed will come later today/tomorrow. Hop on and check it out!


Christmas Season Has Arrived​
It's finally Christmas season and we have got quite a few projects that we have been working on for you.

The first of those is a Christmas Advent Tree. This means that each day when you log on, you can visit /warp Christmas to claim your daily reward. Rewards will be swapped each day until the 25th of December (you know what day that is).

The second and third projects are intertwined.

The second project specifically involves a new survival world that will allow you to explore a new 1.14 world. In this world, there will also be a new shop, an entirely new area for a player market (like the good old days) and a new claiming system. Other changes in detail within the spawn city will also be apparent.

The third project, while it is connected to the second project, is the project many have you been waiting for. We are still in the midst of making this come to life. Get hyped because it is my pleasure to announce to you all that SkyPrison Legacy is working on an entirely NEW PRISON SERVER. We are estimating to have the new islands ready to be played on for you between the end of December and January.

Once this is released, we will also be releasing a new donator store as well

Thank you for reading and let the excitement begin!

Additional notes: we will be redoing the donation store and winners for the skin competition will get coupons to the new store, along with other prizes, when it opens. I hope that gives someone motivation.

There will also be a Halloween event that will be released when the skin competition winners are announced, so stay tuned for that as well.


That's all for now and HAPPY HALLOWEEN!

Hey everyone! As I'm sure you're all aware Halloween is fast approaching so I, along with the other staff members, wanted to give you guys a fun way to celebrate with us on Skyprison Legacy. This year I'll be hosting and judging a Halloween themed skin competition! The staff and I have put together some really cool prizes and I encourage you to try working in groups. Make sure to click the link below for more info as well as where and how to enter!​
https://www.skyprison.net/threads/454/​
Continue...
Big Updates on the Horizon
Sep
14
0 888 by DrakePork : Sep 14, 2019 at 9:25 PM
Hello peoples. We have now updated to 1.14.4, so all of those features are now on the server. We have also switched to a new host. A few big updates that are gonna arrive on the server in the near future, are:

Currently, voting and /shop have been disabled due to host change and id changes on items between 1.12 and 1.13. The old custom enchantments no longer work either. This also includes any items from the same plugin, like rocket boots and powergloves.
Continue...
New SkyPrison Legacy Survival Server!
Apr
02
0 1,550 by blueberry09 : Apr 2, 2019 at 5:41 PM
New Survival Server Released

Thank you for your continued patience, but now is the announcement YOU’VE ALL BEEN WAITING FOR!! The SkyPrison Legacy Survival Server has been released today!

We are extremely excited to present to you all, a Minecraft server for the community to play on once again. This server will not only include some previous structures and buildings from the Old SkyPrison maps (hence Legacy) but also some new medieval themed houses and buildings. When you join SkyPrison Legacy you will get to experience a new type of survival world with its unique terrain and biome generations. As you seek to venture into the wilderness, astonishment, and wonder will fill your mind. May you build the most epic house, become the richest player, become the ultimate collector of special items, recruit the best team or become the top dog in your McMMO leveling, the choices are endless and up to you.

The IP is mc.skyprison.net Come check it out

Secondly, we’ve also added another role that you can apply for called Helper. More info on the Helper Application can be found here...
Continue...
Update on Server
Feb
05
1 1,681 by DrakePork : Feb 5, 2019 at 10:42 PM
Quick update about the server for you all:

The server is coming along nicely and most major features have been implemented. This server will be a survival server. The spawn isn’t fully built yet but is quite close to being finished. After the spawn is finished and beta testing is complete, the server will be released.

Some of the server features will include classic pvp, mcmmo, paintball, parkours, custom enchantments, special items and more!

At this point we can’t pinpoint an exact date for the server’s release, but most likely it will be released before the end of February.

Here's a picture of a part of spawn for you all:

Continue...
Some Announcements
Jan
12
1 1,766 by DrakePork : Jan 12, 2019 at 7:06 PM
Hey everyone. Been quite some time since we’ve had a proper announcement here. Most of you are aware that the server hasn’t been online for a few months now, and that is because of memory issues the server has had, which has caused it to no longer function properly. It is likely the SkyPrison you know and love will never come back online, ever. We are however currently working on getting SkyBlock and Creative up and running. However, we have been working on a small server in the background. Now this server won’t be a prison server, but a lot of content from SkyPrison will/have been reused on this server. However none of your data, like how much money you had or your rank will be transferred over. There’s still a lot to decide for this server and we want your opinions on that. So if you would like to decide what server we make and suggest content for it, click this form: https://goo.gl/forms/P98ZUMO4rmNl5Pnw1 Now as it is sad that SkyPrison will be shutting its doors, it had a good 5 years as a prison server, with both ups and downs, and as a final goodbye to SkyPrison, Blueberry09 has made a video to commemorate our time together on this server. Enjoy.

P.S. The video comes with a few fun little trivia questions, if you choose to participate. If you fill out and answer enough questions right in this trivia quiz, you could win an exclusive discord rank. https://goo.gl/forms/Hn5FfQ58RZSmsRms1 The trivia will be open until Saturday 19th

We have some news for you (obviously). SkyPrison is now the sister of the Zelix Network. Our prison server will also now be known as SkyPrison Legacy instead of SkyPrison.

What’s with the inventory in MY FACE when I join?

It’s a new feature to us but a classic to the Zelix Network. The inventory that pops up in your face when you join is called a GUI (Graphic User Interface) and is brought to you by LukeDeLoop. It shows several items in it that you can click on, leading you to different servers. The mossy cobblestone labeled “SkyPrison Legacy” will bring you to our prison server while the grass block labeled “SkyPrison 2.0” will eventually bring you to the Zelix Network. There are also 2 other blocks, the blue glass block, and the nether star, that bring you to our familiar SkyBlock and Creative servers, which are back online! Lastly, the arrow on the right will let you disconnect from the hub. 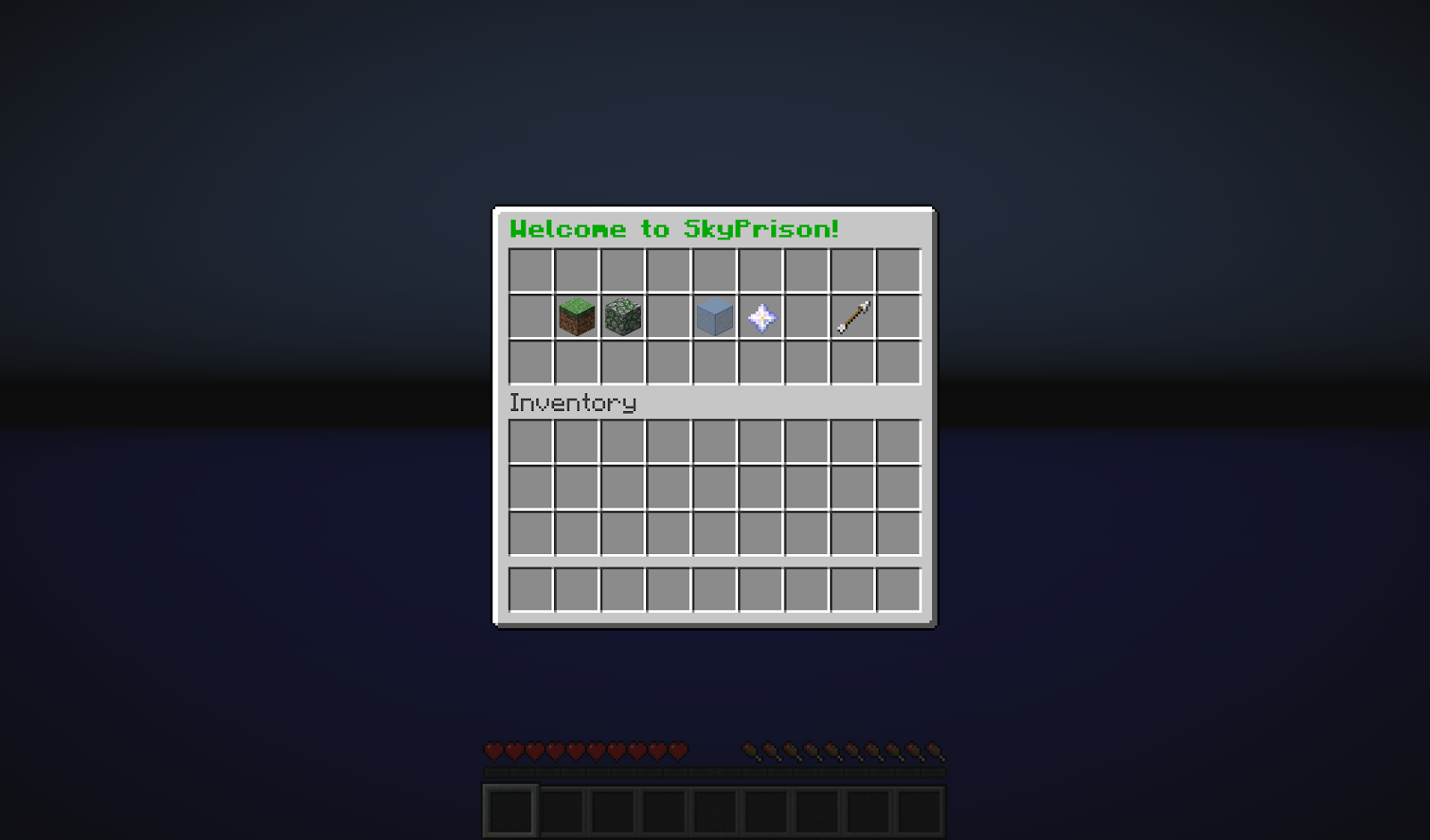 Please welcome our new admins LukeDeLoop and geppi who will be helping out on the server!

Thanks for reading and stay tuned for more updates!
Continue...
Page 1 of 3
XenPorta 2 PRO © Jason Axelrod from 8WAYRUN.COM